The IRIM completes the baseline survey of the ‘Youth Development Project’ 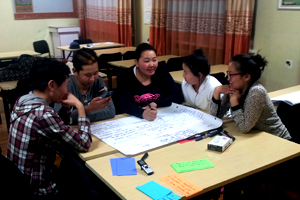 The Youth Development Programme (YDP) (2013-2016) is funded by the Swiss Agency for Development and Cooperation, Government of Luxembourg, and United Nations Population Fund (UNFPA), and is jointly implemented by the Government of Mongolia and UNFPA.

The project aims to build the resilience of young women and men, and reduce their vulnerabilities to gender‐based violence, unplanned pregnancies, STIs and HIV, and increase their capacity to benefit from Mongolia’s rapid socioeconomic change, particularly related to intensified extractive industries. It should be noted that a large part of the data for the baseline study will be obtained from survey. There is an urgent need to conduct a survey because no baseline study has occurred.

The  objectives of the project were:

The survey target group were youth aged 15 to 34. The survey included representatives of various youth groups such as adolescents, students, disabled youth, employed and unemployed youth, youth that have dropped out of school, young miners and young herders. A total of 1600 questionnaires and 60 focus group discussions were conducted among those various groups. During data collection, IRIM planned to cover various vulnerable and target youth groups. IRIM cooperated with various stakeholders such as schools, and local governmental and non-governmental organizations for identifying and finding survey target groups based on the registration and database of the target group.

Finally, we are thankful for all the respondents’ voluntarily participation in the survey and the local stakeholders' (Development Center’s staff, Local Child and Family Development Departments) great support during the data collection process.