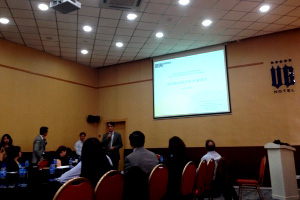 Over the past two months, IRIM staff have been working intensively on the first part of a contract to establish a ‘Monitoring Survey for the SDC Cooperation Strategy of 2013-2016’. The system will provide for the accumulation of various types of information from individuals and households who are engaged in farming and herding, and enable SDC to identify and measure the accomplishments of its projects (and programmes) over the next three years.

Since late May 2013, IRIM staff have been busy with the first part of the Monitoring Survey - the design and implementation of a Baseline Survey. A questionnaire was designed, pretested in two phases, and then presented to 1,300 respondents distributed throughout nine provinces. 1,294 completed questionnaires were ultimately accepted for detailed analysis in Ulaanbaatar.

On 31 July, while the analysis of the results of the Baseline Survey were still under completion, IRIM was invited to present the interim results at the SDC’s Mid-Term Review meeting held in the Ulaanbaatar Hotel. The meeting also marked the handover from the SDC’s outgoing Country Director (Felix Fellman) to the newly appointed incumbent (Markus Waldvogel)

The photograph shows part of IRIM’s introduction to the structure of the Monitoring Survey in general- and the Baseline Survey in particular – represented by a stack of congruent cubes. The three dimensional block shows the different series (years; 2013, 2014 etc), strata (Green Gold project, Integrated Water Management project, etc) and subjects (individuals, households, incomes and so on) that constitute the Survey as a whole.

Work associated with the 2013 Baseline Survey is detailed in a series of documents (available from SDC), and follow-up ‘Annual Surveys’ are expected to take place in 2014, 2015 and 2016.